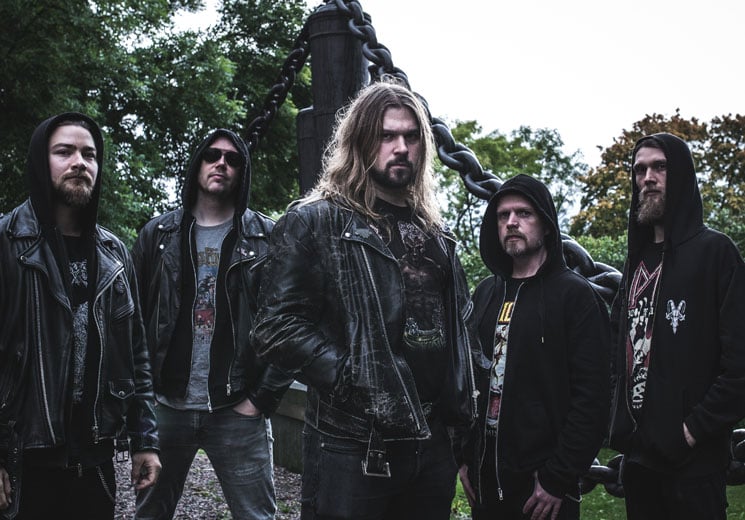 Though a relatively young band, Finland’s Hooded Menace have become one the titans in death-doom, itself one the most interesting sub-genres in modern metal. The band just dropped Ossuarium Silhouettes Unhallowed, their first album since 2015’s Darkness Drips Forth.

Exclaim! spoke to founding member, guitarist and songwriter Lasse Pyykkö, who promised a continuation the sound that Hooded Menace have become known for.

“It’s more melodic and mature, more melancholic,” Pyykkö tells Exclaim! “Compared to Darkness Drips Forth], which was very slow, almost funeral doom, this is back to the old speed. It’s not just slow tempos, there’s a little bit more intense riffing. But it’s still death-doom and doesn’t get faster than Candlemass.”

This distinct balance between the brutal ferocity Autopsy, the lurching grandeur Cathedral and mixing in the dismal expansiveness Thergothon, is the foundation the death-doom sound, and merges to create music particular power.

“I think death-doom just goes deeper,” Pyykkö says. “Put aside most the technical aspects and go for emotion], and it makes it more powerful than blast beats, I think — more aggressive and a different kind feeling. I don’t enjoy playing fast. It’s not so much fun. You can put so much more emotion in when you don’t have to focus on the technical side that much.”

The Spanish horror films the 1970s have come to define much Hooded Menace’s aesthetic, from album artwork to lyrical content, and yet, as Pyykkö makes clear, the music and lyrical content have moved into more ambiguous territory.

“We are going more in an abstract] direction.” Pyykkö states plainly. “The lyrics] are not stories like the older albums], which took directly] from certain movies. This is more abstract stuff — very dreamy and surreal, but still rooted in all things nightmarish and gloomy.”

Giving some insight into his writing process, Pyykkö makes it clear that the sound dictates the words. “All the lyrics are just trying to describe something that fits the music. It’s more about trying to paint a feeling than to describe something in a logical way. There are still a couple movies that songs are not based on, but inspired by. And because it goes from there to someplace else entirely, I don’t even want to mention what those movies are — it gets too easy. The listener should interpret the songs] in their own way.”

Ossuarium Silhouettes Unhallowed is out now on Season Mist.