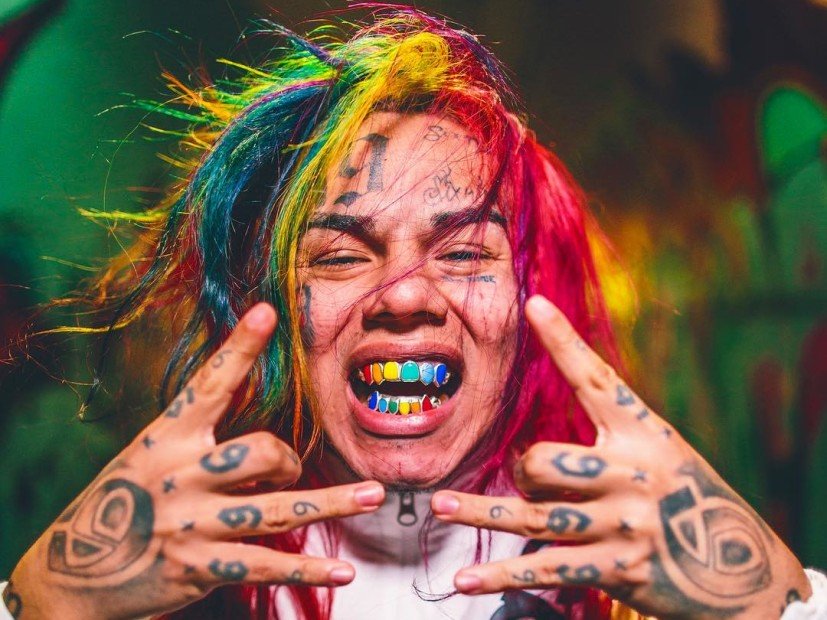 GroovyTracks – This week in Hip Hop, Tekashi 6ix9ine made a viral return to Instagram Live and premiered his new single and video, “GOOBA.”

Also, T.I., Snoop Dogg, Meek Mill and others demanded justice for 25-year-old Ahmaud Arbery, who was gunned down by father and son Gregory and Travis McMichael back in February. Finally, DMX said he wants to continue his rap battle run against JAY-Z on Verzuz.

As promised, Tekashi 6ix9ine made his return this week, premiering his new single, “GOOBA” and an accompanying rainbow-colored visual during his record-breaking Instagram Live. While nearly 2 million viewers tuned in, the home-confined rapper apologized for his infamous snitching and addressed his haters with a clear message — “A rat is doing more numbers than you.”

Just hours before the Live, 6ix9ine and Meek Mill traded a few shots on social media, which ultimately ended with the Philly native dismissing “GOOBA” as “super trash.”

After being granted compassionate release from Judge Paul A. Engelmayer, 6ix9ine was allowed to shoot music videos in his backyard — with the help of his security team — on April 29.

T.I., Snoop Dogg, Meek Mill and others used their platforms to demand justice for Ahmaud Arbery — the 25-year-old unarmed black man who was gunned down by a white father and son while out for a jog on a February morning in Georgia. On Tuesday (May 5), Arbery’s family’s attorney, S. Lee Merritt, shared a disturbing video, which showed an armed Gregory J. McMichael and Travis J. McMichael pursuing Arbery in their truck before an ensuing altercation ended in his death.

“WE Demand Justice for Ahmaud!!!” Tip wrote in a since-deleted Instagram post. “No MO Talk…I’m just sick of seeing, videos, posting pics & stories like these over and over with NO ACTION TAKEN!! MESSAGE BLACK MEN & WOMEN…WE ARE BEING HUNTED!!!”

Gregory and Travis were arrested and charged with murder and aggravated assault on Thursday (May 7) — over two months after the incident.

DMX Calls On JAY-Z For A Verzuz Battle

Of course @dmx picked the homey!!

DMX is ready to get into the Verzuz virtual arena, but he only has one worthy opponent in mind — JAY-Z. During an appearance on Drink Champs, the rap veteran revealed he’s looking to reignite the rivalry with “battle number three,” as podcast co-hosts N.O.R.E. and DJ EFN tried to contain their excitement.

X and Jay’s battle run dates back to the ’90s, with the former Murder Inc. collaborators going head-to-head on at least two famed — and mysterious — occasions. In 2011, GroovyTracks revisited their first battle with those who were actually in attendance.

“[One side is] gonna say DMX won, then [the other is] gonna say JAY-Z won,” Ski Beatz said. “In my opinion, to me, JAY-Z just had a little more finesse because of his style. But DMX was incredibly dope. He could not take that away from DMX. [DMX] was a fuckin’ star.”

Stay tuned to see if JAY can be convinced. Read more about X’s challenge here.

In part one of GroovyTracks’s exclusive conversation with rising rapper Chika, the Alabama-bred talent discussed her new EP, Industry Games, a second EP in-the-making and honing her skills through poetry and gospel.

“Of course, things have changed, but back in the day you had to be able to compete to be a rapper and I was like, ‘I don’t want no smoke, so I’m just a poet,’” she told DX. “I was doing that for a minute and eventually I was like, ‘Yeah, no. These are raps, but I won’t call myself a rapper.’ Eventually, there was one challenge in maybe 2016. I did a rap and it was fire. So that’s when I was like, ‘OK.’”

Read more about Chika’s decision to drop out of college to pursue music, building up her confidence and more here.

Appearing virtually for a video chat with DX, Desiigner reminisced on his humble beginnings, Chicago drill influences and his 2016 breakout single, “Panda.” The debut hit was also the first time he used his since-viral ad-lib.

“The first song, no cap, it was ‘Panda!’” he revealed. “I used to do the ad-lib and you can even hear in ‘Panda’ where I started switching my ad-libs. I was working on the record, I had the record but I never finished it, but when I finished it? The ad-lib came out of me.”

Ahead of Rapman’s British crime drama Blue Story arriving to digital platforms this week, the Roc Nation artist and filmmaker caught up with DX about penning the script, the film’s initial backlash and getting support from JAY-Z and Beyoncé.

“I always knew that when I’d do my first movie I would want an unknown cast because when I watch movies like Boyz in the Hood, Menace II Society, and New Jack City, they all had actors who were unknown to me,” Rapmand told DX. “That’s what made me connect to those films even more.”

Based on Rapman’s 2014 YouTube series of the same name, Blue Story marks his directorial debut. Read his full interview here.