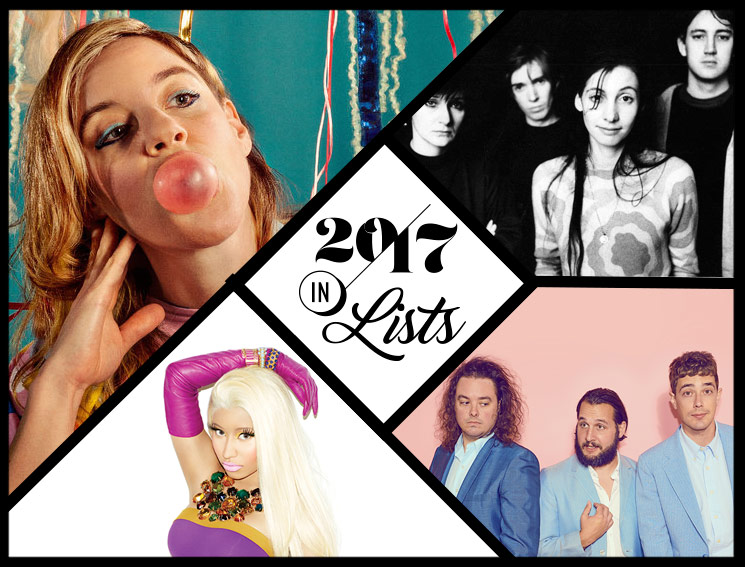 As far as we know, Kendrick Lamar isn’t releasing a record in 2018, meaning that everyone else will get a shot at making the best album the year. Here are some the albums that we’re most looking forward to in the year ahead.

To relive the year that was, check out our Best 2017 coverage and peruse our 2017 in Lists section.

On her forthcoming Resolve LP, composer Popp Ackroyd eschews the field recordings her previous work in favour richly textured, multi-instrumental suites featuring Björk collaborator Manu Delago on Hang, Mike Lesirge on clarinet and flute and Jo Quail on cello. If the first singles are any indication, Resolve is going to be one 2018’s most beautiful releases.

Toronto songwriter Afie Jurvanen is known for his folksy leanings and st rock smoothness, but he tapped into hip-hop influences when making this LP with D’Angelo collaborators. Reported inspirations include Anderson .Paak, Kendrick Lamar and Kanye West. Preview singles “Way with Words” and “No Wrong” are smooth slices mellow, slinky soul.

The Ontario group have already shared a couple tracks — “Love Too Soon” and “Forget Me” — from their forthcoming Richard Swift-produced album for Paper Bag Records. The new tunes steer away from their signature yelping indie rock in favour atmospheric balladry. A press release cites influences like Buddy Holly, the Everly Brothers and early Beatles, saying that the album is “less concerned with what sounds hip than what feels good.”

Having released a few singles in 2017, rapper Cadence Weapon will issue a self-titled album eOne in 2018, featuring guest spots from Deradoorian and Blue Hawaii. Cadence Weapon will be his fourth LP overall and his first since 2012. He’s released a few tracks so far, which combine dark beats and atmospheric synths with introspective rhymes, making for a promising preview what’s to come.

Calexico
The Thread That Keeps Us
(Anti-)
Release Date: January 26

Many the albums on this list are informed by political fears, and the latest from Arizona lifers Calexico is no exception. Case in point: The Thread That Keeps Us‘s lead single is a rustic rocker called “End the World with You.” A press release promises “an earthy yet expansive sound spiked with jagged guitar tones and flashes distortion.” It was mostly made in a home studio on the coast Northern California.

Cardi B has had an incredible journey, from supermarket cashier to exotic dancer to social media star to reality television personality to music star. Her 2017 single “Bodak Yellow” was a world-conquering smash, but she still hasn’t released her debut album. That will apparently change in 2018, although there’s still no confirmed details for the record. On November 19, she tweeted (sic), “Sometimes i think is ready sometimes i think it’s not so I’m going to take my time till it’s right.”

What do we know about Death Cab for Cutie’s upcoming ninth studio album? Well, on November 17, the band tweeted a grainy black-and-white photo frontman Ben Gibbard playing an acoustic guitar with the caption “LP9 // 2018.” Currently, that’s all the info we’ve got, but when the new disc arrives, it will be the followup to 2015’s Kintsugi.

Adventurous German composer Nils Frahm has spent the past two years building his very own Saal 3 studio, even getting some friends to help out with building a pipe organ and mixing desk from scratch. While past albums were defined by limitations, All Melody was reportedly inspired by the freedom that this new space afforded him.

Even though the Scottish dance-rock group aren’t quite at their mid-aughts peak anymore, we’re looking forward to their first album since 2013. Frontman Alex Kapranos called the record “simultaneously futuristic and naturalistic,” and the title track is an epic that shifts between cerebral artiness and urgent danceability.

Genre-crossing Toronto musician Zaki Ibrahim launched a GoFundMe in late 2016, promising her new album would arrive in 2017. That never happened, but she’s finally scheduled to drop The Secret Life Planets in 2018. The first taste the album’s “sci-fi soul” is available in the form single “Cold Feet.”

We find it a little difficult to trust Nicki Minaj after that time in 2016 when she trolled fans by claiming she had an album called Pick My Fruit Out coming out imminently. Although that turned out to be a joke, she does appear to have an actual, not at all fictional album in the works for 2018. This past fall, she told T Magazine, “I am getting Nicki Minaj figured out with this album and I’m loving her.”

There’s nothing subtle about Trump’s politics, and there’s also nothing subtle about Ministry’s response. Not only is the veteran industrial metal band’s new album called AmeriKKKant, its song titles include “Antifa” and “Wargasm.” Leader Al Jourgensen said that the record is designed to “provide FEMA-type relief for the devastation ‘Hurricane Cheeto’ has brought upon us.” Come on, Al — tell us how you really feel.

Moby
Everything Was Beautiful, and Nothing Hurt
(Arts & Crafts)
Release Date: March 2

Veteran electronic musician Moby has had a very busy couple years, releasing These Systems Are Failing (2016) and More Fast Songs About the Apocalypse (2017) between penning open letters criticizing the state American politics. He’ll be keeping the streak going Everything Was Beautiful, and Nothing Hurt, which “finds him returning to his orchestral, soul, trip-hop and gospel roots,” according to a press release.