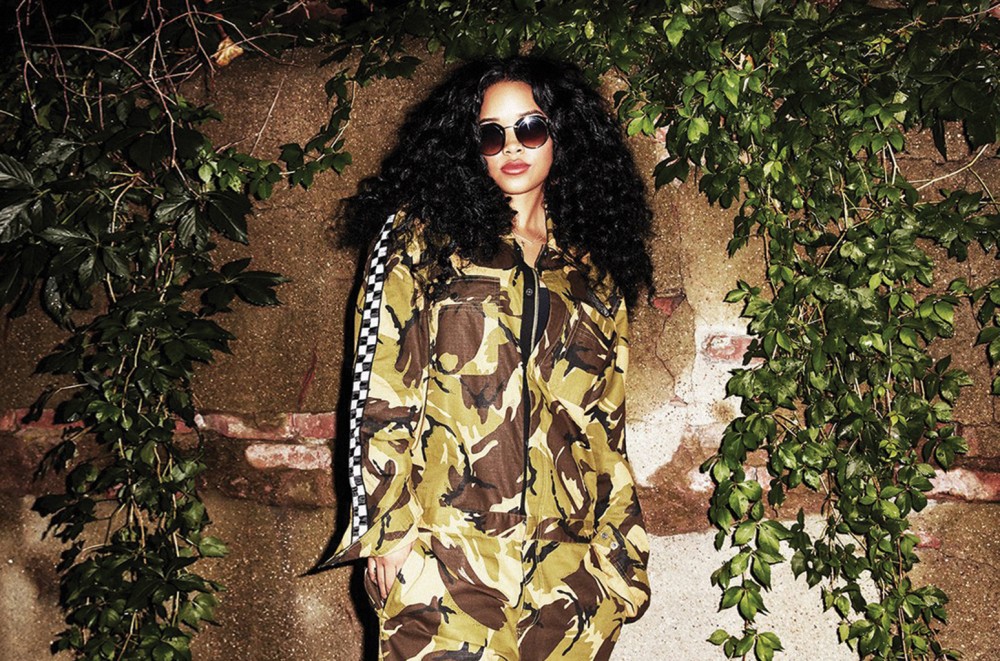 It's impressive when a new artist scores 10 Grammy nominations in just two years, but to do so with no proper album under your belt is almost unheard of. Enter H.E.R., the 22-year-old who has been wooing the industry with her soulful octaves since 2016's H.E.R. Volume 1 EP.

Since then, the singer has gained a growing fanbase and the respect of the Recording Academy despite not releasing a debut studio album (which she promises is coming soon). For the 2020 Grammys, H.E.R. is nominated in five categories: record of the year and song of the year ("Hard Place"), album of the year (2019's I Used to Know Her compilation LP), best R&B performance and best R&B song ("Could've Been" featuring Bryson Tiller).

"I was in London and I went to one of my favorite restaurants and just ate a lot," the singer happily reminisces with Billboard on how she celebrated her latest round of nods. "That's what I do when I celebrate."

Ahead of the 62nd Grammy Awards on Jan. 26, H.E.R. teases what to expect when she graces the stage, the growth of contemporary R&B and why new single "Slide" — which peaked at No. 17 on the Billboard R&B/Hip-Hop Airplay chart — means so much to her.

You now have a total of 10 Grammy nominations and two wins. You're becoming a Recording Academy golden child.

It's crazy to think that I've [accomplished all of this] in just two years and that my first nomination became a win. You question the path that you're on sometimes and I have no right to do that now! I know I'm exactly where I'm supposed to be. And there's no greater feeling than manifesting what is meant for you.

What is really special is that you actually performed "Hard Place" at last year's Grammys and now the single is nominated in two major categories: record of the year and song of the year. It's a full-circle moment.

When I was first told I would be performing at the Grammys, I had no idea what I was going to do. I didn't even think about that song initially. As it was getting a bit more popular with my fans, it turned into a standout record. I thought about how many elements it had. There was R&B, but I wrote it in Nashville so it very much country and pop as well. There's also this electric rock vibe. I thought it would be the perfect song, and the performance to me was an elevated version of the actual record. I almost wish we put out that [live] version. But it's nice that people can see the simplicity and honesty of the track, and to also see how powerful it is when it's performed live with my guitar solo and the choir in the background. That may be the reason why it was nominated. But I'm so thankful and grateful for the entire 2019 up until this point. It's unbelievable.

You're also going to take part in Let's Go Crazy: The Grammy Salute to Prince following the ceremony.

I can't believe it — it doesn't feel real. I spoke to Sheila E. who's putting it all together. She was telling me stories about her and Prince, and how she really appreciated my artistry. The fact that she worked so closely with him… it's crazy that she could say that about me. I've been a bit nervous. But I'm so excited because I try to honor him in any way that I could, and now I can do it on a big stage alongside all the other legends who are performing.

R&B is somewhat overlooked in the grand scheme of the industry, despite having such an impressive 2019. So it's great to see an artist like you represent the genre in these major categories.

R&B has always been about raw emotion, and I think the authenticity of it was missing. It was never dead — we always listen to the classics that will remain timeless — but we forgot what it meant to make [music] with real emotion that's inspired by rhythm-and-blues and soul. We've gotten back to our roots and real instrumentation on records. I did my own Lights On Festival last September and we literally sold it out in about 20 minutes. There were 14,000 all there to see R&B artists like Lucky Daye, Jhene Aiko, Summer Walker, Daniel Caesar and Ari Lennox. People were there to really feel the music, so I'm glad that authenticity is coming back. We're starting to see through the fluff and manufactured sound.

Speaking of the festival, what have you learned from expanding beyond music to become more of a businesswoman?

I plan on bringing it to New York and London this year. The goal is absolutely to become a mogul and amazing businesswoman. I look up to someone like Rihanna who has so many different entities and is doing other things besides music. Music is a platform, but I'm passionate about a lot of other things, and bringing people together is one of them. What better way to do that than at a festival? I believe I'm the first black woman to completely own a festival without any partners, so I just want to be a role model. [Editor's note: Live Nation is the producing partner for Lights On.] We don't have enough of those to let young black women know that they can do and be anything. We are bosses.

We were first introduced to you as being a more soulful, moody singer. “Slide” is more upbeat than your usual style. How did it come together?

There's so many sides to me and no one has seen that part. And being from the Bay Area, I wanted to make a song for my hometown and the West Coast. I had such a fun time recording it in the studio and it's just a feel-good song. People keep asking me where I got my "707" [The Bay's area code] sweatsuit from, but it's a one of a kind! (laughs) I'm just really glad the record is growing. I just dropped the remix with Pop Smoke, A Boogie [Wit Da Hoodie] and Chris Brown. They decided to hop on it and it meshed so well together. They help bring more of that fun side and hip-hop's energy.

YG is featured on the original track and he's also a California native. That West Coast chemistry really elevates it.

I met him at Coachella and he was like, "Take those glasses off and show your pretty face!" I thought that was the funniest thing ever. I wanted him on the record so badly when I first created it, and I had to represent for the West Coast. [His verse] just added to the fun.

The song's theme is almost a modern-day take on the classic Bonnie and Clyde story.

We take moments and relationships lightly. So I'm saying [in the lyrics] that we're on the same page and same wavelength. I'm trying to grow and get somewhere with somebody. So where do we take it from here?

Can we actually expect a sunglasses line from you? It's become your signature.

Oh absolutely! It's coming much sooner than you think, I promise you. You're going to love them.

We're patiently waiting for your official debut album. Will 2020 be the year?

You can definitely expect it in 2020. I am performing a song at the Grammys that will be on my new album, so it'll come shortly after. I've been taking my time with it just because I've been touring so much and haven't really gotten time to dig into it and find out what I want to say or what was sitting in the back of my mind. I'm getting back to [2016 EP] H.E.R. Volume 1 roots, which have songs like "Slide" with a little bit more energy and bounce. I think people are going to love it. It's still really honest with other elements besides R&B, but R&B will always be at the core.

A version of this article originally appeared in the Jan. 25, 2020 issue of Billboard.