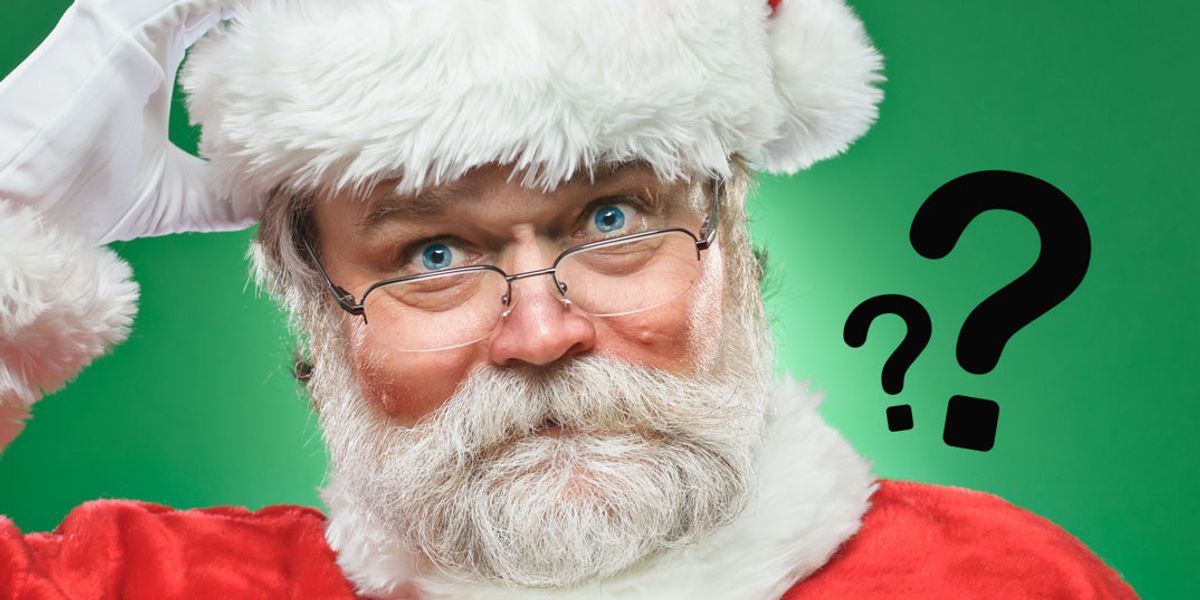 The holiday season is upon us!

It’s Christmas! Time to start breaking out those old Christmas albums. Put on some Bing Crosby, some Mariah Carey, maybe even a little John and Yoko… if you’re a normie that is. Who needs that kitschy, sentimental junk? For this Christmas, let’s get weird. Here are thirteen songs for people whose relationship to the holiday season is… unconventional. Enjoy!

Are Koo Koo Kangaroo brilliantly weird, or weirdly brilliant? Who cares, their combination of corny but catchy beats, and so-lame-they’re-awesome lyrics is deviously brilliant. In this song they invite you (in the guise of a quirky neighbor) to their Christmas party, make a bunch of weird requests of you, and promise a great time. This is a soft start to the list, we’re about to get extra strange…

Do you hate Alvin and the Chipmunks? Yeah, me too. Do you wish there was a Christmas song about them being killed and then fed to Santa sung in the style of Nat King Cole? You’re in luck! Bob Rivers recorded this nihilistic ditty about killing the squeaky voiced rodents in 2000. It features Alvin (well, in this rights-free edition he’s called Melvin) and co being cooked and eaten to the tune of Chestnuts Roasting on an Open Fire. This is a great one for making the children question the meaning of the season.

Nothing says Christmas like glam rock and a song title that references a British euphemism for penis! The Darkness are the officially endorsed heirs to 70s rock, you probably know them for I Believe in a Thing Called Love, but this is one of (a couple of) Christmas tunes that they have recorded in their time. It’s a little generic once you get past its titter-worthy title, but it’s still great fun! Get a chorus of children singing this and wonder what life choices led you to this point!

Check out The Darkness!

Do you love December 23rd? If your answer is “I don’t know, I’m kind of indifferent,” then you’d be on the same page as most people. Except professors Paul and Storm! Originally off of Do You Like Star Wars? and later featured on their Christmas album It Might be Xmas, this song sings the praises of that weird not-quite-holiday. It’s quirky, silly, and completely pointless. Listen to it now.

Check out Paul and Storm!

For fans of Doctor Who, this is a bizarre must have. The Go Go’s are a band that released very little in their time. Hailing from Newcastle, this was their only hit. Hugely popular during the Dalekmania that swept the UK in the 1960s, it quickly disappeared in to the woodwork, only to resurface in 2000 on the CD Who’s Doctor Who? It’s not a great song, the riff is reminiscent of the Peter Gunn TV theme, the singing is the weird 1960s lisping of grown women pretending to be children, the Dalek voice is so-so… but damn it all, you try and find anything else quite like this for a Christmas album. It’s not like Star Wars ever had a Christmas song…

That’s a lie, they totally did. They actually have a couple thanks to the infamous Holiday Special. Want some more Star Wars in your Christmas? Gotcha covered, here is C-3PO teaching R2-D2 how to sing a Christmas tune. You didn’t know you needed it (and you probably don’t), but here it is in all its ridiculous glory. Enjoy, and here’s wishing all our Wookie readers a happy Life Day!

Staying in outer-space, here’s something that’s just flat out weird. Apparently once called Kurt Cobain’s favorite band (they toured with Nirvana back in the day), Shonen Knife rock the jingles off of this non-carol. It’s about getting a spaceship for Christmas, going to Pluto, and Santa riding in a bison sleigh. You know… normal Christmas stuff.

Now for something more melancholy. This post-punk ode to the disappointing toys and bad friends of childhood is probably the least Christmassy of all the songs on this list, but it’s still definitely worth a listen. Wistful, disaffected, and hinting at undercurrents of British class warfare, this is sure to get people thinking about socialism at the annual office party!

Check out Half Man Half Biscuit!

Yeah, this one’s NSFW. It’s barely suitable for home. Ladled to the brim with profanity at a level only Australians are capable of, Kevin Bloody Wilson tears Christmas a new one in this song all about reindeer and assorted friends quitting their jobs. Don’t play this one for your kids, but put it on in the car after a particularly stressful bout of Christmas shopping, and have a nice cathartic experience.

You bet there’s Weird Al on this list! The king of musical parody has this rocking original tune for y’all to celebrate Christmas with. It’s about Santa getting drunk, going nuts, and slaughtering everyone at the North Pole, save a few survivors. This one is violent, no question, but it’s mostly cartoony violence, so you can play it for your slightly older kids. Another one for when you need to blow off some holiday steam!

Hey, remember how the 90s were sometimes total garbage? No? Well, then listen to this and refresh your memory. New Kids on the Block, the kings of severely dated white-person dance-rap-pop, present this ridiculously tacky, stupendously pre-millennium Yuletide hip-hop. Put it on when you want people to either dance ironically, or throw up and leave your party. Both are distinct possibilities.

Check out New Kids on the Block!

“Deck the Halls With Pepperoni” – The Teenage Mutant Ninja Turtles

Who asked for this? I mean who? Who signed off on this? I mean, the Teenage Mutant Ninja Turtle Christmas Musical itself I can kind of understand from a money-grubbing, cash-in, the-kids’ll-buy-it, mentality… but who heard the words “pizza-themed, reggae cover of ‘Deck The Halls'” and said “This needs to happen. Spend money on this”? Only a mad man. This is a good one for 1am on Christmas Day when you’re drunk and ready to show your family something strange on YouTube. Enjoy with as much cynicism as possible.

Learn about this monstrosity!

“Father Christmas Do Not Touch Me” – The Goodies

If 2017 were a Christmas Carol, this is what it what would be. A creepy as sin song about Father Christmas making inappropriate suggestions, being rebuffed, and yet still persisting. Performed by British comedy gods The Goodies, and released as a B-Side to their hit single The Inbetweenies, you will likely feel INCREDIBLY UNCOMFORTABLE when this comes on. Play it during your next game of Cards Against Humanity, it will go down a storm.

Check out The Goodies!

Merry Christmas, and god bless us, everyone!