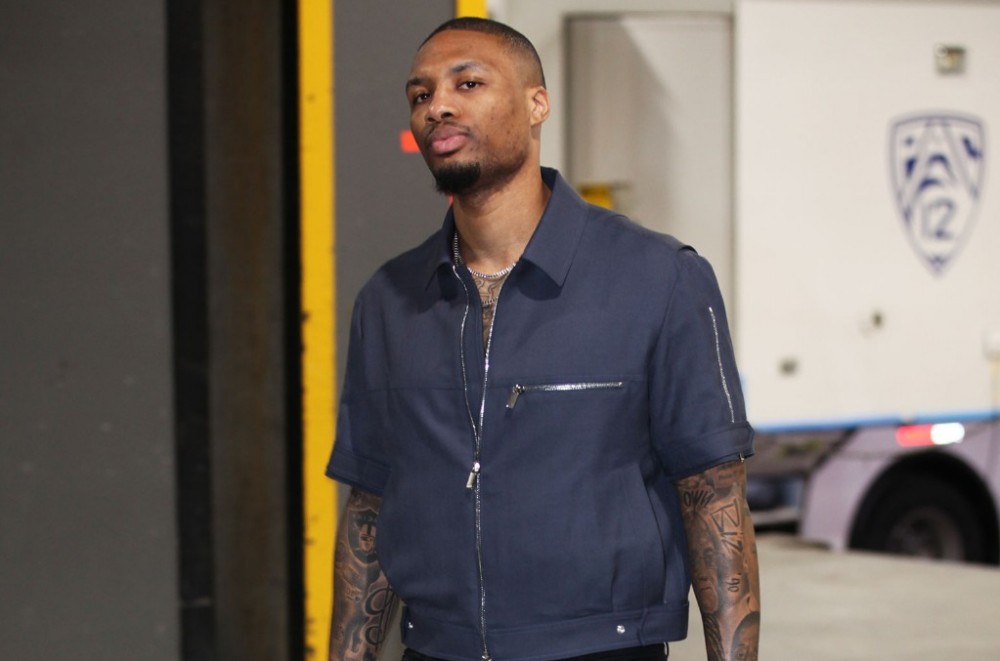 The NBA season may be hanging in limbo for All-Star point guard Damian Lillard — whose Portland Trail Blazers were in the midst of mounting a playoff push when the season got suspended due to COVID-19 concerns — but that doesn’t mean that he isn’t keeping busy.

Aside from his much-decorated NBA career, Lillard is also an accomplished rapper, with three studio LPs under his belt — one of which, 2016 debut The Letter O, graced the Billboard 200 albums chart. He’s also been the curator and primary host of the #4BarFriday series since 2013, which gives a number of up-and-coming rappers the opportunity to showcase their skills over beats provided by special guest producers. (“We judging them on heart, on bars, on energy and personality and all that,” Lillard explains.)

This season, #4BarFriday has stepped up its game with featured beats from the starry likes of Mannie Fresh, Hitmaka and Murda Beatz, as the series has been getting a new level of attention with most of the world under quarantine. “You don’t have much going on on TV — no sports,” Lillard says. “A lot of people’s attention is kinda going [towards social media], so you’re getting a bigger audience.” He also says he’s getting a new degree of athletes and entertainers popping into the comments, and bringing their own followings with them: “And once we bring them in, they stay in and watch.”

One week after the first anniversary of his series-winning shot against the Oklahoma City Thunder — and before this week’s #4BarFriday kicks off at 5:00 PM ET with an all-female cypher, featuring production from veteran hitmaker Hit-Boy — Lillard talks about the series’ exciting new season, as well as what he’d play as his last song in a Bone Thugs n Harmony Verzuz battle, and how he’s feeling about a potential return to the NBA season.

You’ve got a pretty impressive roster of producers so far for this season. How do you set those up?

I’ve been reaching out to ‘em, just presenting it to ‘em. We just had Mannie Fresh, he had already done a #4BarFriday like a year after it started. Hitmaka was cool with it, we reached out to him. Nonstop [Da Hitman], who did the first week, he produced a lot of the songs on my last album, and he’s from Portland. So we’ve just been kinda going that way with it, just reaching out to people — they send their beats, and we go about it that way. They’ve been great about participating and helping out.

Is there a dream producer you’re hoping to get on the line at some point?

Speaking of Timbaland and Swizz Beatz, have you been watching the Verzuz battles they’ve been putting on?

I haven’t — I’ve heard about all of them, but I haven’t witnessed any of ‘em. I usually kinda catch it late, like I hear about it after it’s already happened.

I saw you were retweeting something about Bone Thugs n Harmony being underrecognized. They’ve got that rap battle coming up with Three 6 Mafia…

Yeah, I saw that. Bone Thugs is like my favorite rap group ever.

If you were Krayzie Bone, what Bone Thugs song would you save for last in your battle?

Speaking of the Verzuz series, they’ve been getting a little flak for not really including enough women. You’re doing an all-female MC #4BarFriday — was that something you wanted to make a point to do this season? How did that come together?

The first couple weeks [of the season], we had a couple women participate. But it was like two women — one or two. And then on a Tuesday, we did an all-woman [takeover] on the #4BarFriday page, and we let one of them women that had been doing #4BarFridays for about seven years — we let her host it. And then this Friday, we’re doing an all-women cypher. So we’re trying to find a female producer, and we’re going to be doing that this Friday.

What’s the curation process for the series? Are you looking through millions of auditions, or do you have people that help you filter out the really good ones?

I got people that help me filter through ‘em, but usually, we’re picking people who are from the #4BarFriday community that have participated in it for years — that we’ve come into contact with and that we’re familiar with. Just because it’s become a bigger platform in the last two weeks, we wanna give ‘em the opportunity to showcase.

It’s been people who’ve been in the community the most consistently right now — but obviously, we’re gonna start bringing people that are new to it, or people who are from the outside, and making ‘em known to #4BarFriday and letting ‘em participate.

Is there one MC from the community that’s particularly representative of what it’s about, that you’d most recommend for people to check out?

I mean, I don’t think it’s one person. It’s a girl named Teezy, a guy named Lex, another guy named Wakil, Sicario Sosa, Addmo, Lana Shea… we got a lot of people who’ve been doing it for a long time, but they’re all different types of artist. So I wouldn’t be able to point to one person to say, “This is what we’re looking for.” Because in that type of industry, you can’t be looking for one type of anything. You’re just looking for good talent, good music, style, stuff like that. I think #4BarFriday has a little bit of all of that, in all of the artists.

We had the best week of my #4BarFriday x @genius IG Live Cypher series to date today. @chiefwakil ended up the champ, but @sicariososa, @stevegunna_, @lilyfangz, @whocarespublishing, @stevicooper, @peytspencer and @1lexdateacher all went crazy. Shoutout to @hitmaka for providing the beats and jumping on the live. Also shoutout to @robmarkman, @demar_derozan, @xzibit, @datwon, @dribble2much, @nonstopdahitman, @brookfieldduece and @fabbydavisjr1 for tapping in and giving feedback to the MCs. 8 new MCs and a new producer coming in next Friday. We’re just trying to give under the radar MCs a platform and do something positive while we are under this #StayHome lockdown. Follow @4barfriday to be a part of the movement!

Has there been one lyric this season that’s really been like a killshot during the competition?

And the guy who we kept third, the whole cypher, he was behind the other two guys who was finalists. And he ended up winning, because he spit his last verse, and then he dissed the other two dudes, and they didn’t really know how to respond to that. So he ended up winning, just based on that interaction. And he had some of the coldest bars that we’ve had on the show.

How often do the competitors try to work you into their lyrics?

Are your Portland teammates getting in the comments at all?

I saw you had a call for art for a new single you have coming out. What can you tell us about what that’s gonna be, and maybe when it’s dropping?

Yeah, it’s called “GOAT Spirit,” and I don’t know exactly when I’m gonna put it out. It’s probably gonna be in the next week or so.

What are you listening to in quarantine?

I been listening to Rod Wave’s new album. Other than that, it’s just the normal music I listen to.

Most players that you talk to, are they going stir crazy right now, or are they kinda finding ways to make the most of the time, like you’re doing?

Uh, I think that there’s ups and downs. Like sometimes you’re motivated and got energy to do that — and then other times you just don’t know what to do with yourself. I think it’s probably the same for everybody.

Are you feeling optimistic about the season returning at some point?

We just passed the one-year anniversary of the OKC shot — people were going nuts about that on social media. Was your phone just blowing up all day?

Yeah, my phone was blowing up, but I was getting a lot of mentions on social media. It was all over my Instagram, all over my Twitter. I watched it, because it was just constantly on my timeline! But not like over and over again, nothing like that.