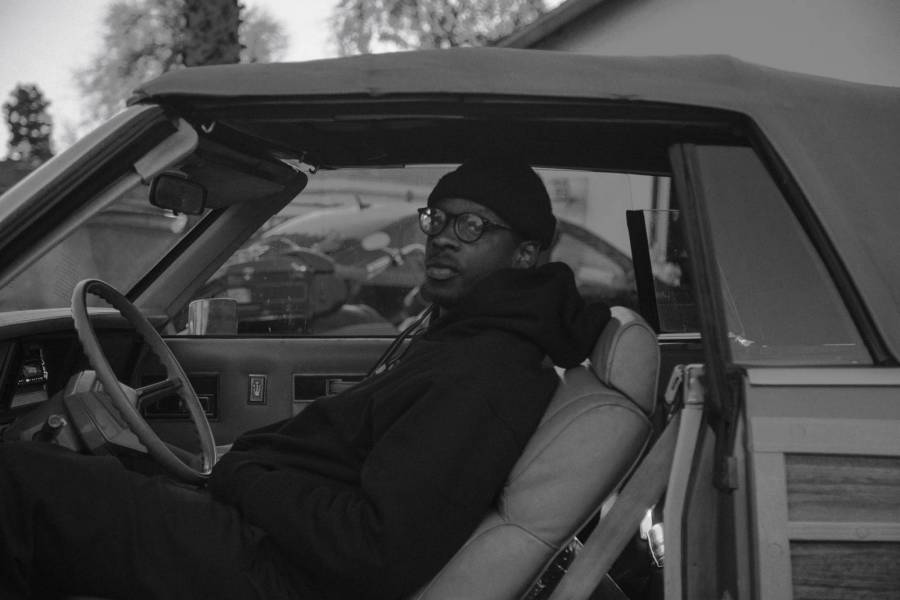 Los Angeles, CA – JAHMED wants more than just a few years in this industry. The L.A.-based rapper released his debut, THEBOOFMOBILE, this past March, a bite-sized EP that’s loaded to the brim with high-energy raps and cohesive production. In such a turbulent industry, artists pop into public appeal only to fade quickly and suddenly. JAHMED is paying more attention to building a sustainable career than most. How is he doing that? Through keen attention to detail, respecting the game and not only trusting, but fostering his passion for creativity.

After rapping for over a decade, he decided to take a risk to make THEBOOFMOBILE. He poured his finances into the project, trusting that his voice could break through the slush-pile of the new generation of MCs. He was right. THEBOOFMOBILE has been met to critical acclaim and helped solidify that JAHMED is here to stay.

JAHMED is frank and honest when we speak over the phone. He’s confident but not egotistic; he knows where he comes from, what brought him here and how it could have gone differently. He’s a student of Hip Hop first and foremost—he pays respect to the OGs of the genre before he acknowledges his own successes. These sensibilities translate to his music—he leaves nothing unsaid and is unafraid to lay his own insecurities out for the world to judge.

GroovyTracks spoke to JAHMED about his journey through Hip Hop, finding his voice and where he’s headed next.

GroovyTracks: Are you in L.A. right now?

JAHMED: Yeah. I’m in Victorville, California which is not too far from LA.

GroovyTracks: How’s everything been with the virus over there?

GroovyTracks: Tell me a bit about your Hip Hop journey.

JAHMED: I was introduced to FL Studio from my brother. He was recording, making beats on FL Studio, and then he eventually passed the torch down to me, because I was interested, I was over his shoulder trying to figure out how to work the software. He taught me how to record myself. Thirteen years old—I taught myself how to record. That kicked everything off. Eventually, I’m pulling beats off YouTube, bringing them to FL Studio, recording myself. Doing that for a good few years of my life until I found my producers. That is the start—that’s the journey.

GroovyTracks: Did rapping come more naturally to you?

JAHMED: Yeah, definitely. I think in a sense anybody can be a rapper. Once you find your voice of who you are and what makes you unique on those records, that’s when you get into the next world of being an artist and creating those paths. I think once I figured my voice out, it was different.

GroovyTracks: Did you go through different flows and styles before you settled into your own voice?

JAHMED: Of course. I wanted to be everybody I was listening to.

GroovyTracks: Who was that at the time?

JAHMED: At the time, shit I’m listening to a lot of Lil Wayne. A lot of Jay-Z. A lot of these artists back then that I grew up on, those was the artists that I wanted to be. So I may reflect those in the records. A lot of time you hear [on] those songs, me trying to be those artists.

GroovyTracks: Are you from L.A. originally?

GroovyTracks: I definitely hear a lot of L.A. sounds, but I also hear Atlanta, New York, Houston. What influences your sound?

JAHMED: Definitely a lot of southern stuff, too. I grew up on a lot of Outkast. My mom was an Outkast fan. Of course, whatever my parents were listening to, it trickled down to me. So I became plugged with the south too. A lot of Memphis stuff, a lot of Atlanta stuff, that’s why you hear it in my music.

GroovyTracks: So you’re on your journey, you’re discovering your voice; when was it that you realized that you had something special? Was there a song? A particular moment?

JAHMED: The song probably wasn’t as good as it was supposed to be, but I think [it was] when I caught the feeling. It’s a certain feeling that you get as an artist. At the end of the day as an artist you want to project feelings from people. You want people to feel what you feel on these records. The fact that I caught my first feeling off one of my songs, was like, ‘okay this is something very special—I’m definitely moving in the right direction.’ The goal is to always get this feeling—once I came to that, that’s when I knew I had something.

THEBOOFMOBILE OUT RN. A 13 minute album.. What’s ya favorite records so far??

GroovyTracks: What do you want to get across on this debut? 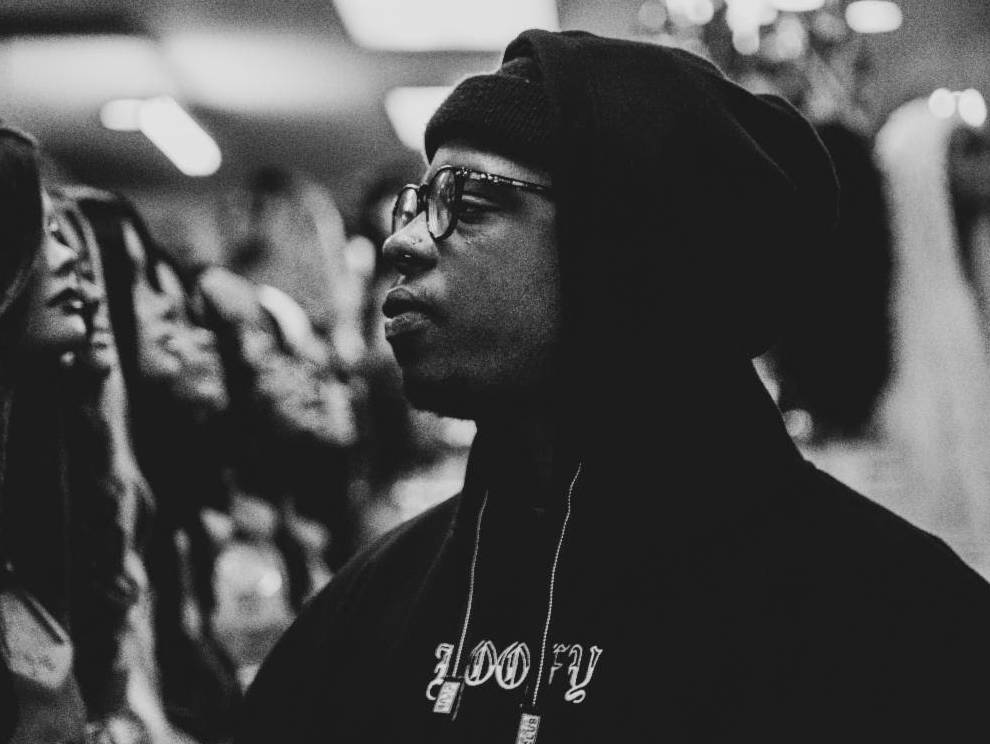 JAHMED Puts On For Pomona In “FIAT” Video

GroovyTracks: You took a big financial risk and put a lot of your money into this project. Can you talk a bit about your commitment to getting a project done right and how you learned to believe in yourself in that way?

JAHMED: I think what it refers back to is the passion I have for creativity. It’s weird but I really think it was more so me being passionate for creativity. Just not knowing what could happen out of that situation by taking that financial risk—not knowing. I didn’t see a return off what it took to buy that car, but I got a whole project out of it. It’s how you look at it. I knew something would happen, but I couldn’t pinpoint it. So I think the mysteriousness of what I was doing kept me going. Something’s gotta happen, I don’t know what it is, but I’m willing to see. Whether it was just me meeting one person off my financial risk, I feel like I gained something, I feel like I won. At the end of the day, I think it’s what you expect. I wasn’t expecting to get a million dollars in return because I bought this piece of shit car. I was willing to accept whatever came out of that as a win. Even if it was just meeting one person. OK, this is a win. This got me here? This is a win. It’s how you look at it.

GroovyTracks: It’s clear you show a lot of respect to the rappers that came before you. I was wondering why it’s so important to you to study the greats of Hip Hop.

JAHMED: That’s a very good question—I’m glad you asked that. I think it’s very important to shed light on who laid down the foundation, because there would be no foundation for me. If there wasn’t a Kendrick, there wouldn’t be a JAHMED. If it wasn’t a Tupac, there wouldn’t be a JAHMED, and it’s important that we have to understand [that] as newcomers to this game, that a lot of the things that we have is because of those before us. Ice Cube kicked down the door for a lot of us; for us to have our creative control, our vision, and not settling for stuff. You look at Ice Cube and what he did from leaving N.W.A because it wasn’t a fair treatment for him and his income. He started his own shit. If we never had an Ice Cube, what would the game be? If we never had a JAY-Z, what would the game be? You gotta cherish these people because ten years from now, I want people to look at me, like what would the game be if JAHMED wasn’t here? It’s very important that I always first and foremost let people know that I’m a student. I grew up on this music. I respect the people that came before me because they opened this door for me. I wouldn’t be here if it wasn’t for a lot of them.

GroovyTracks: Something I’m hearing here—which I think is very different from a lot of upcoming rappers—is a focus towards a sustainable career. How are you attempting to build a long-lasting career so that you can make it into that ten-year mark?

JAHMED: I think one of the things is always respecting the game first. As dirty as it can be, as fickle as the game can be, you respect the game, it’s always gonna respect you back. You look at the most successful artists in the game who’s been here for plus ten years, it’s because, first and foremost they respect the game. What comes with respecting the game is respecting your peers, respecting the artists that’s next to you. Respecting these labels. Being a stand-up guy or woman in this industry. It’s gonna shed light back to you. I think that’s first. Secondly, it’s about being consistent. Never losing the passion of Hip Hop. I think if I can remain my passion throughout the next twenty-five, thirty years of life, I think I’ll be here for the long run. You gotta be consistent with the work. Last but not least is the fans. They don’t want to hold you up. You let the fans know that they just important as the person that’s in front of the microphone. Keeping communication. It’s touching to me that I can sit here now, that I’m in a position where I’ve never met these people and I can hold a conversation with them about my music. Just a year ago I was just a little kid in a room trying to figure out how I can get to these people. Now my request DMs on Instagram is like plus a hundred. I get to talk to these people because they fuck with my music. I think last thing is respecting the fans, showing them that you appreciate them. I’m trying not to use the word fans, I’m trying to use supporter more, because I feel like using the word fan is disrespectful. It’s something different to me. I never like to knock the value off of a human being. That’s what type of person I am.

GroovyTracks: What’s been the most difficult part of your career so far?

JAHMED: Getting to the point where I’m at now. Difficult because as up-and-coming artists we battle this thing of confidence and not [being] sure it’ll ever work. I think just that mysteriousness of not knowing if this shit will ever happen. I think that was a difficult part, but once I broke that wall of—this is actually possible, you have a little more comfort and confidence once you get past that stage, knowing, I’m right outside the door now. It’s possible. I still have that mindset, it still might not ever work. It’s one of those things—we always battle that. Maybe this shit is just a total dream that will never happen. Then the next side is that it’s a reality, a possibility that this will happen. Once I got past that wall, I really control my destiny here when it comes to this music shit. Now let me just sit down and create. I can be the best person I can be when it comes to this microphone and creativity.

JAHMED: What’s next from JAHMED? I think the same thing. We keep dropping bangers, we keep dropping cohesive projects and giving people something to talk about. It doesn’t stop. My only goal I have is to always come back with another one. I want to do this shit every time. I want to give you concept albums, I want to give you singles—good artwork, good videos. This is what I’m here for. My calling is this. My calling is to give people something that’s going to live long. You can expect another album–I don’t know when, maybe this year, maybe next year, maybe three years from now–who knows? But I won’t stop. As long as I’m breathing, the creativity stands, it keeps going.