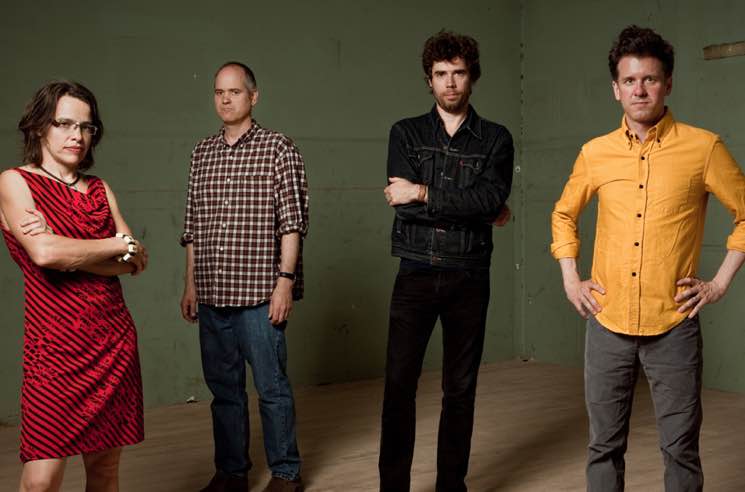 The plethora new sounds that exploded out the ’90s was staggering. And while many the decade’s most singular artists continue to do great things both in the mainstream and the underground,  few have remained as artistically ambitious, consistent and wedded to their original ethos as Chapel Hill, NC quartet Superchunk. Certainly none sounded like they were having as much fun. The band’s ability to weld punk, noise and a lo-fi aesthetic to pop melodies and song structures set them apart, endearing them to more mainstream audiences, even as the band’s politics — a fierce adherence to indie and DIY — saw singer-guitarist Mac McCaughan and bassist Laura Ballance build their own community with Merge Records.

With the band’s 11th album, What a Time to Be Alive, due later this month, we take stock the indie heroes’ storied career. Here is the Essential Guide to Superchunk. The Superchunk everyone know and love were born here. Building on the promise their debut, No Pocky benefitted from the addition Jim Wilbur on guitar, who forged a twin-guitar sound with McCaughan that remains to this day. The band had been the subject a major label bidding war prior to the album’s release (they opted to stick with Matador) and it’s easy to see why. Though they’d hone their sound on subsequent releases, Steve Albini’s (uncredited) production captures their raw energy without smearing over the hooks, which there are plenty. For some Superchunk fans, this was a bridge too far. And if you’d fallen in love with the version Superchunk that wrote “Slackmotherfucker,” it’s easy to see how this downright genteel record would feel like a betrayal. Yet the slowed tempos and addition instruments like slide guitar and keyboards only give further pro the band’s brilliance; in stripping back their fuzzy blitzkrieg, the band’s songwriting and arranging talents come into sharper focus. If there’s an underrated gem in the band’s catalogue, this is it. Jim O’Rourke isn’t a name most people associate with lo-fi indie-rock, which is probably why Superchunk enlisted the veteran experimental Chicago musician to produce their seventh album, and their efforts paid dividends. O’Rourke managed to bring shape and focus to a sound that had sprawled on the middling Indoor Living, opening a new sonic chapter in the band’s career that they’d dive deeper into on Here’s to Shutting Up. Still, it’s the songs that ultimately carry the record, and it’s hard to beat songs like “1000 Pounds” and “Hello Hawk,” which balance the new approach while retaining some the band’s signature guitar buzz. With the addition drummer Jon Wurster, the Superchunk lineup we know today (at least in the studio) was cemented, and the band wasted no time exploiting their strengths. Wurster — who today also plays with Mountain Goats and Bob Mould — iss the anchor the band need to really let loose, as evidenced by opener “Precision Auto.” Moreover, they were able to carry that energy across the record’s 13 tracks, even cooling f, tempo-wise, for heavy-hitting fare like “Mower,” making the record the group’s most viscerally exciting listen, even 20-some-odd years later. For a band whose modus operandi is fuzzy, treble-y guitars played fast, there are surprising multitudes to Superchunk’s music. Other records did the fast thing faster, or better showcased the band’s ability to bend their music to different styles and sounds, yet none puts it all into a blender better than Foolish. The record doubles as a breakup album for McCaughan and Ballance, even as they transitioned from Matador to Merge, which they jointly ran. The build from opener “Like a Fool” through “Water Wings” is a master class in pacing, while “Driveway to Driveway” is the great indie rock power ballad no one knew they needed. Superchunk’s various singles, seven-inches and compilation appearances are as essential to their story as their albums, so digging through their three singles comps is highly advisable. Along with a rash B-sides and (good to great) covers, the band ten fer up alternate versions songs that later appear on full-lengths, giving listeners insight into their creative process while also showcasing their strength as arrangers.

Here’s Where the Strings Come In (1995) is a fine album and the band’s commercial peak; “Hyper Enough” was a minor hit. But its video, in which the band seek therapy, was more telling than it seemed at the time. Surely the inner band turmoil caused by McCaughan and Ballance’s breakup, even as they continued to run a record label together couldn’t have helped. The result is an album that, while hitting all the right notes, feels a little soulless compared to what had come before and what the band would do later.

Indoor Living (1997) follows in a similar vein. The group seemed to recognize that they had backed themselves into a creative corner. While there are shades what was to come on Come Pick Me Up — slower tempos, extended song lengths, additional instrumentation — listening today it feels as if the band were unsure as to what to do with these new sonic elements, resulting in a promising, if not fully realized outing.

Superchunk basically disappeared for the oughts — save the odd single or compilation appearance, they were out the spotlight after wrapping up promo duties for 2001’s Here’s to Shutting Up. But they came roaring back in 2010 with Majesty Shredding, a record that blended the reined-in noise and energy the group’s mid-’90s work with the more formal experimentations Come Pick Me Up. I Hate Music (2013) continued in a similar vein, albeit with far darker undertones — many McCaughan’s lyrics tackle the death friend and frequent visual collaborator Dave Doernberg. Nevertheless both belie band members’ increasing age while continuing to push the Superchunk’s sound, however incrementally, into new and rewarding places. There are no out-and-out clunkers in Superchunk’s vast discography. Despite including “Slack Motherfucker,” a DIY, lo-fi call the arms, 1990’s self-titled debut lacks the precision, melody and economy songwriting that would come to define the band. Also notably absent: guitarist Jim Wilbur and drummer Jon Wurster. Still, Superchunk’s passion is on full display and you can hear the seeds what they would become.

While Superchunk have a deep bench when it comes to rarities — see the band’s three (so far) compilations singles and rarities, each worth your time — The Clambakes Series is really for die-hards only. Beginning in 2002 and now eight volumes deep, the series began as a set limited edition live albums. They went digital after 2004’s Vol. 3 (Vol. 4 was recorded at Sur La Bouche in Montreal in 1993), while a download Vol. 8 was packed with the 2014 reissue Indoor Living. Certainly worth tracking down if you’re so inclined, with the exception Vol. 1‘s acoustic set, casual-to-medium fans are unlikely to find anything essential here.