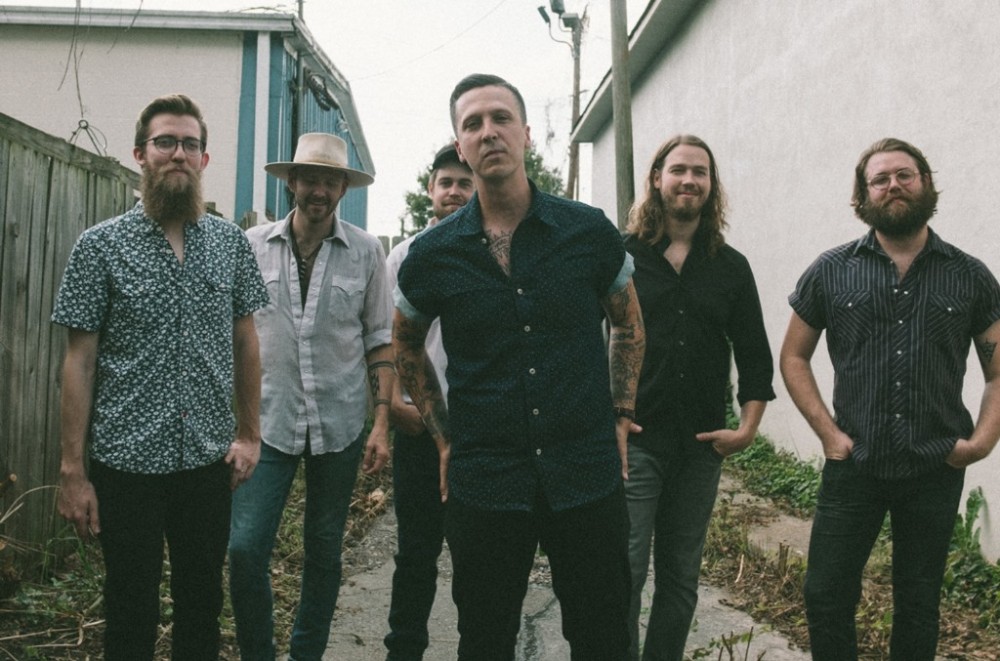 A Bible verse framed on the wall of a bathroom in a Little Rock, Ark., Airbnb put American Aquarium‘s new album Lamentations in motion.

BJ Barham, the group’s founder, frontman and mainstay, spotted the verse while he and his wife were staying at an Airbnb during a solo tour in January 2019. “That verse was up there on the wall and I saw the word ‘lamentation’ in it,” Barham tells Billboard. “I was raised in a very indoctrinated family, Southern Baptist. My dad was a deacon. That word itself is something I don’t hear a lot in present-day language; unless you’re actually reading that book of the Bible, you don’t think too much about lamentations.

“So I started looking at Lamentations, which is basically a letter from Jeremiah questioning the existence of God as he watches his country fall apart around him. I saw a lot of correlations between that and 2020 America, and that started everything for” the album.

The first song Barham wrote for the New West set, due Friday and premiering in full below, was “Me + Mine (Lamentations),” a slow-burning seven-minute screed about political divisions and the plight of the middle class that stretches back at least four decades. It gave Barham a sense of what he wanted to do, and not do, with the rest of the album.

“I knew I wanted to write political songs, but you realize, ‘Sh–, if I write 10 of these for a record, nobody’s gonna want to listen to this,'” he explains. “So I pivoted from the biblical use of the word lamentations to Webster’s dictionary, where it’s ‘an extreme expression of sorrow and grief.’ So I wrote about poverty, love and loss, losing a child, losing a marriage, losing faith in your surroundings — each song tries to cover a different trial and tribulation and what breaks us as human beings.”

Barham and the current incarnation of American Aquarium — which has seen almost 40 members during its 15 years — dresses those heavyweight topics up with muscular, rocking energy and “big, singalong rock songs.” And he further balances the weight, somewhat, with songs such as “The Luckier You Get,” in which he recalls wisdom passed on by his father, and a treatise about in “Brightleaf + Burley” to encourage his native North Carolina and its rich tobacco soil to move into legalized marijuana growing.

Shooter Jennings, according to Barham, was the perfect choice to produce Lamentations. He had originally planned to record the album in Memphis with another producer, who backed out two weeks before the planned session because he didn’t like the songs.

The band’s booking agent suggested Jennings, and he liked Barham’s songs enough to shoehorn the sessions into his schedule — but suggested the band make it in North Hollywood instead. Barham says the eight-day session — with basic tracks for the 10 songs cut in just four days — was a dream.

“[Jennings] is everything everyone says about him,” Barham reports. “He’s an amazing well of musical knowledge. He loves all music, and he’s not gonna bullsh– you. He’s not gonna tell you he likes something if he doesn’t like it, and we tried every single idea that got tossed out. I’ve never been involved in a project where there was zero ego from anybody, band or producer. We got in there, just seven people under a roof with one goal, to make the best possible record you can.”

Barham also gives props to his four new bandmembers, all fresh since 2018’s Things Change except for guitarist Shane Boeker. “I may fall down a lot with bandmembers, but I always seem to fall forward,” he says. “Everybody gets replaced by somebody who brings a little more to the table. This current band is not only unreal players individually, but as a collective unit there’s something great about how we play together. It’s easy. It’s fun — like when you started your first band. I think you can hear that on this record.”

Lamentations is, of course, coming out in the midst of the coronavirus pandemic that’s put all performing plans on hold. Barham and his team had discussions about how the situation might impact the album, but he says delaying its release was never part of the agenda. “I’m sure every [artist] has a different plan, but changing the album release was never on the table,” Barham says. “We said it was coming out May 1 and I wanted to keep it there. Right now, with people stuck at home, I think there will be more people who are going to be willing to listen to a record for an hour than if their busy life was going on as usual. A lot of folks are looking for distractions and things to do, so maybe Lamentations can do that for them.